Tattoo trends throughout the years Have you ever wondered how tattoo trends have changed throughout the years? Tattoos have been around for years. Longer than you think. Let’s take a trip down the tattoo memory lane.

The oldest tattoos date back a lot further than you can imagine. The world’s oldest mummy, Otzi, was discovered on the border of Austria and had approximately 61 tattoos. These were sets of black tattoos that were either horizontal or vertical lines.

I bet you didn’t know that Captain James Cook has a unique connection to tattoos? Hard to believe right? In fact, Captain James Cook, being the explorer he was, took his first voyage to the Tahitian Islands from 1768 to 1771. It was here that he was first exposed to the procedure of tattooing.

The word ‘tattoo’ comes from the Polynesian word ‘tatau’ which means ‘to mark’. The tribal word tatau has been used for centuries before Captain James Cook arrived at the Island but it was the captain who first documented the terminology.

At the turn of the 20th century, tattoos weren’t socially accepted, and the majority were seen on circus performers, sailors and criminals. The tattoos were commonly used to tell someone’s story and profession. Sailors, for example, would don an anchor tattoo.

Tattoos were used as a way to welcome new and young sailors to the crew, think initiation ceremony if you will. There on in, the role of tattoos evolved into more useful functions. It helped to identify sailors who may have fallen overboard or drowned.

Tattoos took the role of a diary almost. They would reveal the different ports the seamen had been to. The tattoos represented all the different destinations and the length of their journeys.

If you had a Turtle tattoo, we would know the sailor had crossed the equator, and a Swallow implied they’d travelled 5000 miles.

Traditional tattoos in the sense were still not socially accepted in 1920, however, they did become popular amongst women in the cosmetic sense.
Makeup was expensive, so cosmetic makeup was the latest fad and was cost-effective. Eyebrows and lip liners were pretty common amongst the ladies. However, they would try and keep this secret as tattoos were only really donned by circus performers, sailors and the criminals.

It seemed memory was not society’s strong point back in the 1930s. This was the decade that social security numbers were introduced, and most people couldn’t remember their numbers, so out of necessity, they would get the numbers tattooed onto them.

Traditional tattoos were still socially unacceptable however if you were seen with an SSN tattoo, you weren’t tarnished with the same brush as the circus performers, sailors or the crims.

This decade saw tattoos evolve and it was thanks to Norman Keith Collins. Norman AKA “Sailor Jerry” started creating his own pigments and adding colour to his tattoo designs.

The types of tattoos typically seen in this decade were nautical or military-themed. People were feeling very patriotic. World War 2 saw a surge in patriotic tattoos. Also, enter Girl Power! Women took to the workplace, and there was a rise in women getting patriotic tattoos as well.

Ultimately, due to the new modification in these tattoo designs, meant that tattoos had started to be a bit more socially accepted.

Although the 1940s saw the increased acceptance of tattoos, it seemed in the 1950s, society’s view had taken 2 steps back. Tattoos were still associated with criminals and thugs. However, tattoos were seen as a sign of manliness. Nautical tattoos continued to be a popular design but there was also a rise in chest tattoos.

What a game changer the 1960s were! And it was all down to a wrist tattoo on a famous musician by the name of Janis Joplin, known as the first tattooed celebrity. She was inked by one of the best tattoo artists known at the time, Lyle Tuttle. After being photographed on the cover of Rolling Stone magazine, tattoos were suddenly cool, and everyone wanted one. Janis also had a small heart tattoo on her left breast.

When asked about her tattoos, she said she wanted some decoration. The one on her wrist was for everyone and the one on her breast was for her and her friends only.

Aside from that, the classic skull and crossbones tattoos had become increasingly popular, more so with bikers.

When you think of rebellion, you think the 80’s. Tattoo designs were getting bigger and brighter. The Celtic knot design with its bold black outlines was becoming popular, not to mention colourful motif designs.

The music industry had a great influence on the tattoo industry, especially rock and roll. When people saw their favourite music artists with tattoos, they soon rushed out and got tattoos themselves. By the 1980s, tattoos were finally socially accepted.

The 90s saw a surge in upper arm tattoos. Popular trends were tribal tattoos, Chinese letters and sun tattoos. Celebrities continued to play a huge influence on tattoos throughout the 90s. One celebrity tattoo of the 90s people remember, was the iconic Pamela Anderson barbed-wire arm tattoo. Another celebrity who loved her tattoos was Sporty Spice, Mel C.

You knew you were cool if you followed your favourite celebs.

The ‘noughties’ saw a rise in the back and lower back tattoos. Yes, we are talking about the ever-popular, at the time, “tramp stamp” tattoo. This was also the decade that the fabulous Rihanna entered the music industry and bought with her the trendy star tattoos. Butterflies and Yin Yans tattoos were also choices of design in the 90s.

In this decade, not only were tattoo designs the trendiest they have ever been but also it was where on the body people were getting inked that was a growing trend; on the shoulder, ankle, hands and thighs to name a few.

People started to get very creative with tattoo designs and one such popular design was the small finger with the novelty moustache.

RiRi continued to influence the industry with a new underboob tattoo. Great move for her, as this was the same time her debut album Isis was released, and it seemed women all over the world were getting tattooed in the same area. Other designs hitting the trend train are infinity tattoos, feathers and tribal designs. Also not forgetting that dolphin on the ankle.

It’s fair to say tattoos are here to stay and so they should. The only thing that changes are the tattoo trends throughout the years. Remember the barbed wire? Well, that was popular back in the 90s, but today, not so.

Luckily these days there is a solution if you want to erase an embarrassing tattoo, or if you wanted to fade a tattoo, from back in the day. Fading a tattoo allows to cover it with a new one. So at least you can keep up with today’s trend and be that cool kid again.

At Goodbye Tattoos in Neutral Bay, Sydney, our friendly laser tattoo removal specialists are ready to answer any questions. Get in touch today www.goodbyetattoos.com

If you are interested in learning more about the laser tattoo removal process, head to our blog page.

How long do I need to wait in between my laser tattoo removal treatments?

How many treatments for laser tattoo removal? 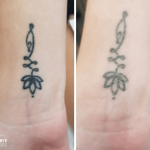 Why does laser tattoo removal cause frosting?

Goodbye Tattoos can completely remove your unwanted tattoo from 4 sessions